Posted on Aug 30, 2015 by Oriel Colwyn in Past Exhibitions

Welsh-born Chalkie Davies joined the Rock and Roll Circus in 1973 after photographing David Bowie's last night as Ziggy Stardust at the Hammersmith Odeon. He worked as a staff photographer at the NME from 1975-79, shooting numerous iconic covers including The Clash, The Ramones and The Sex Pistols. In 1980, he helped launch The Face magazine. From 1977-85, he also shot record covers for Thin Lizzy, Elvis Costello, The Specials, The Pretenders, Pete Townshend and David Bowie.

He also made a series of formal portraits of many of the best musicians from this time. By the mid-1980s, Chalkie felt the need to change his focus and headed to the United States of America to pursue a new career as a still life photographer.

Before leaving the UK, Chalkie put all of his work for both NME and The Face into a vault, deciding to leave them unseen for thirty years, wondering what cultural relevance they may have when he finally decided to reassess his work.

Earlier this year, these unseen portraits and a large selection of his best work for the NME made up a stunning Retrospective at the National Museum Cardiff. (9th May–6th September 2015)
Many people traveled to see this Retrospective in Cardiff and now Oriel Colwyn, in conjunction with Chalkie, is pleased to bring some of his work to an audience in the north.

Chalkie has tried to replicate as closely as possible the original show, including the huge iconic images, and some of the specially prepared multimedia material. The show also includes ten photographs that he was unable to fit into the National Museum, and some photographs taken behind the scenes during the preparation of the original exhibition.

Oriel Colwyn is open most weekdays between 10am and 5pm, there are however sometimes a few changes due to events being held within the gallery.

To ensure Chalkie Davies: Creating the NME years is accessible to as many people as possible the gallery will also stay open until 9pm on most evenings.

Please check the dates below to confirm exhibition opening times for your visit: 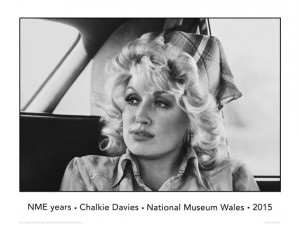